The Doclé Reed Quintet is made up of Master’s students (class of 2019) from the Bienen School of Music at Northwestern University.  Formed in the fall of 2017, Doclé  has been coached by J. Lawrie Bloom, David McGill, Michael Henoch, and Leslie Grimm, and has worked with the Akropolis Reed Quintet and WindSync.  The quintet strives to perform a balance of contemporary reed quintet repertoire and transcriptions that present the unique potential of the reed quintet instrumentation; always looking for new repertoire for the developing chamber ensemble, the Doclé Reed Quintet actively composes, arranges, and commissions works in a variety of styles.

Check out recordings of past performances here!

Media Director Sharon Nakama (b. 1994), oboist, was born and raised on the beautiful island of Maui, Hawai’i.  She graduated from the University of Nevada, Las Vegas with a dual Bachelor’s degree focus on Music Education and Oboe Performance.  Sharon has studied with Susan Ochi-Onishi, Dr. Stephen Caplan, and Michael Henoch.  She enjoys taking pictures, eating exotic foods, hugging cats and dogs that aren’t hers, and hiking.  She owns two chinchillas named Boubou and Mr. Jo.

Marketing Director Josh Goo (b. 1995), clarinetist, was born and raised in Denver, Colorado getting his Bachelors in Music from the University of Denver before beginning his Masters at Northwestern University studying with Steve Cohen. His clarinet playing has led him to many wonderful experiences including being a part of the Aspen Summer Music Festival, Nebula Ensemble, The Kaos Duet, and, of course, Doclé. In addition to spending endless hours in the practice room, he loves to spend time with his wife, Hannah, usually playing video games together.

Financial Director Caleb Carpenter (b. 1994), saxophonist, attended the University of North Carolina School of the Arts in his home state of North Carolina, studying saxophone with Taimur Sullivan and Robert Young. He has enjoyed success in many national competitions, with highlights including being selected as a finalist in the 2018 North American Saxophone Alliance College Solo Competition, and being named the winner of the 2017 Music Teacher’s National Association Woodwind Young Artist Competition. Caleb enjoys books, television, video games, hiking, going to the beach, and spending time with his 19 year old cat, Salem.

Operations Director Christopher Rueda (b. 1994), clarinetist and bass clarinetist, grew up outside of Cincinnati in Mason Ohio. In 2017, he graduated from the Eastman School of Music after studying with Jon Manasse and Kenneth Grant. He then moved to Chicago and completed his master’s degree in clarinet performance from Northwestern University – Bienen School of Music, where he studied with Steve Cohen and Lawrie Bloom. Christopher spent the summers of 2016 and 2017 at the Brevard Music Center Summer Institute and Festival where he was the bass clarinetist in the Brevard Music Center Orchestra. Currently, Christopher is the third and bass clarinetist of the Dayton Philharmonic Orchestra. In his free time Christopher enjoys arranging and transcribing music not only for quintet, but for a variety of ensembles. 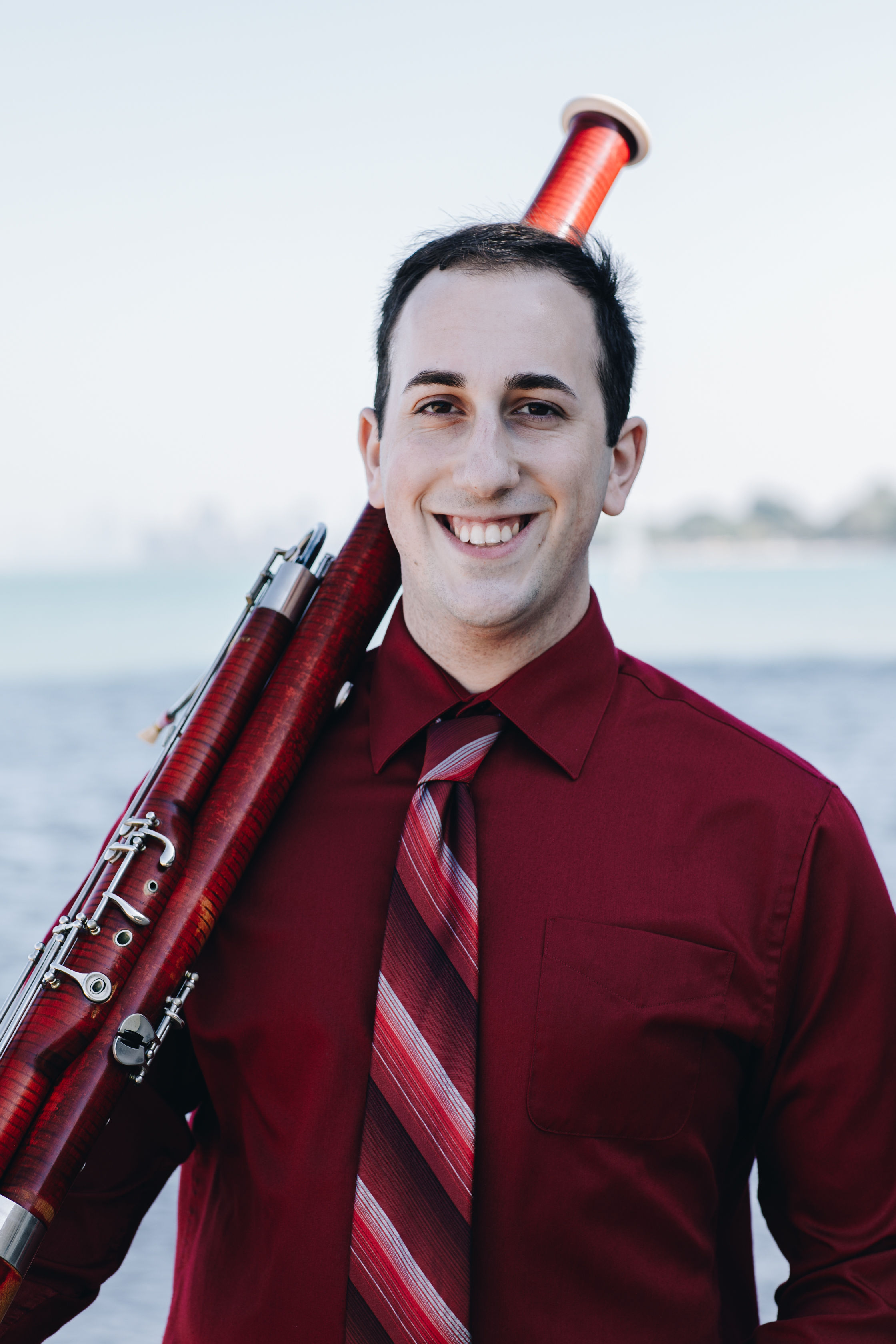 Executive Director Vincent LaMonica (b. 1993), bassoonist, is a native of rural Ashford, Connecticut. Prior to his studies with David McGill at Northwestern, Vincent attended Boston University, where he studied with Nancy Goeres, Margaret Phillips, and Ronald Haroutunian. Vincent is on the faculty at the University of Hartford’s Hartt School of Music community and collegiate divisions, owns the Quiet Corner Music Studio in Ashford, CT, and is the conductor of the East Woodstock Cornet Band and Babcock Cornet Band. An in-demand substitute bassoonist and contrabassoonist, Vincent has performed with the Symphony Orchestras of Springfield (MA), Portland (ME), Albany (NY), Kenosha (WI), and Bangor (ME) the Orchestra of Indian Hill (Littleton, MA) and others, and enjoys an active freelancing career throughout New England and the Midwest.  When not making reeds, Vincent enjoys hiking, sailing, kayaking, and swimming.

To foster inclusivity and enrich the culture of chamber music.

We perform innovative programs in conventional and unique venues.
We aim to collaborate with great performers and artists who will help us create inspiring and exciting audience experiences.
We strive to commission composers of diverse backgrounds to expand the repertoire and utilize the potential of the reed quintet.
We prioritize making music approachable for a broader community by performing and sharing relevant music.
We provide engaging educational outreach to help foster a genuine appreciation of music.

In our interactions with collaborators, audiences, and each other, we strive to be:
Inclusive
Empathetic
Approachable
Innovative
Relevant

For when you need a little levity…